We are so thrilled to announce, for every sale in 2021 we will donate a percentage of our commission to these 2 AMAZING Organizations: 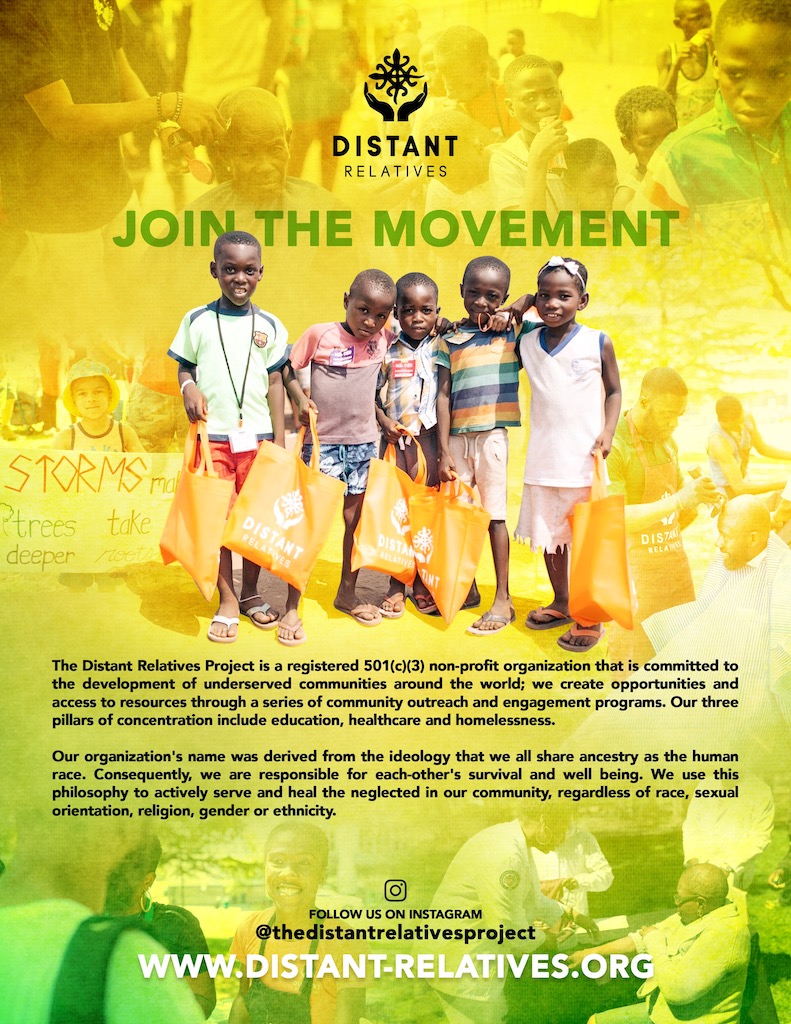 The project was established in 2017 by William Asiedu after a personal return trip to Ghana. The  vision was to create an outlet for the public to give back to the community in a manner that results in life changing impact; while connecting the diaspora to Africa through fellowship. The personal dream was to be the driving force of change in Ghana. In December 2017, the project was birthed after William visited his mother’s hometown, Akim Oda, to make an honest donation. Distant Relatives donated school supplies, clothing, toiletries, and computers, to over 8000 students at Chia Methodist Primary School A and B, located in the Eastern Region. In that same visit we provided medical supplies and equipment to 8 hospitals across the region. Finally, we raised enough money to renovate Seva AME Zion Primary school, and built a computer lab and library. This trip revealed our ability to drastically impact communities and create significant change in the lives of people. With the help of family and friends, we created a team of individuals who are passionate about helping those in desperate need and have a heart to serve other people.

The Distant Relatives Project is a 501(c)(3) non-profit organization based in the Washington D.C metropolitan area. Our mission is based on the commitment to underserved communities around the world; by creating opportunity and access to resources. This is performed through a series of community outreach and engagement.

Our target audience quickly evolved into international affairs as friends were inspired and projects were coordinated in their native countries. Through the promotion of modern education, health awareness and safe practices, as well as access to resources; we aim to bring opportunity and empower underserved communities around the world. 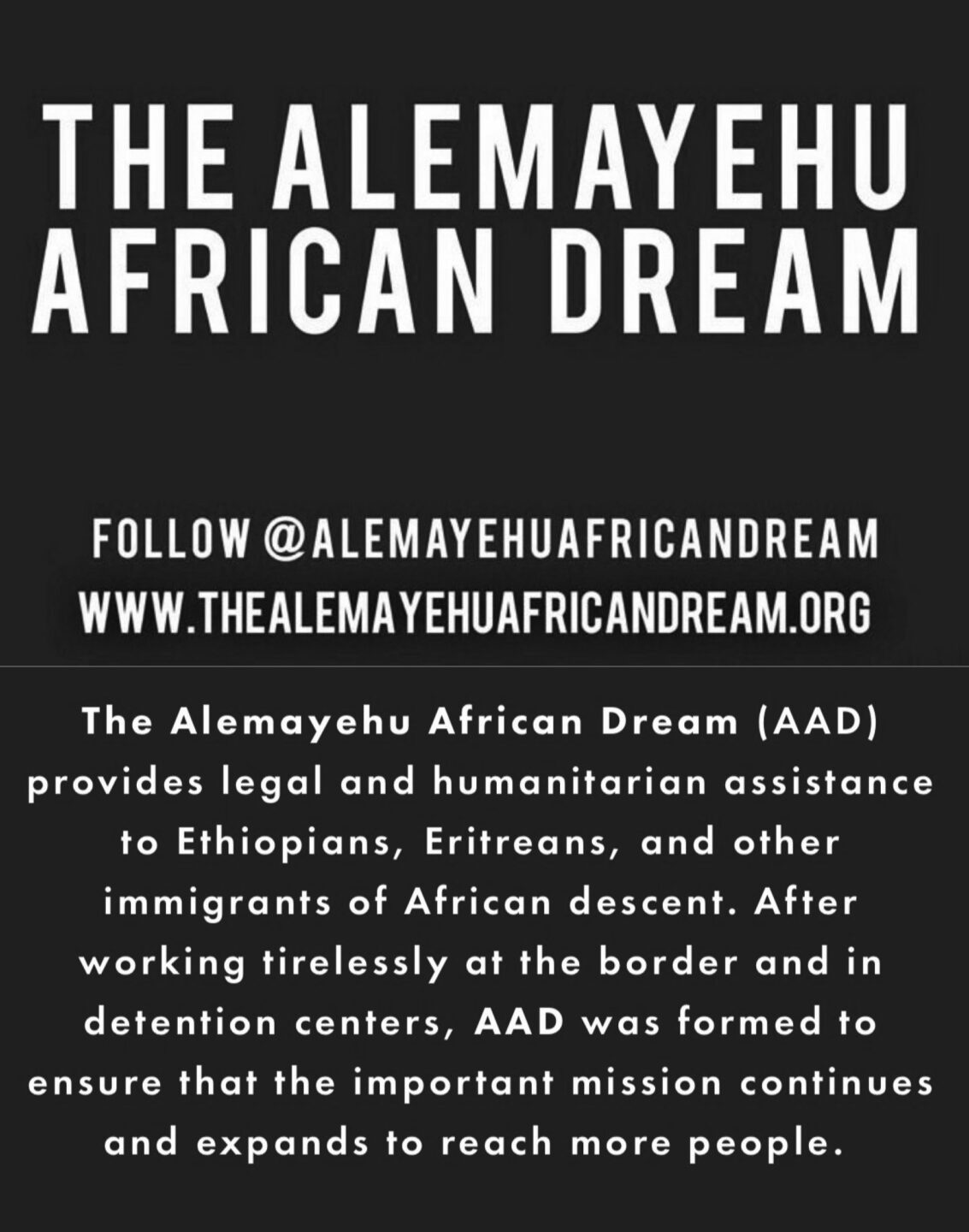 This fund has been set up to provide humanitarian assistance to Eritrean and Ethiopian (Habesha) asylum seekers stuck at the border in Tijuana.

Over the last several months, we have been working at the border and in detention centers across the United States.  We have traveled to Tijuana, Mexico to provide assistance to those who are seeking asylum in the United States.  Some of the main objectives of our trips have included aiding immigrants in understanding their legal rights, as well as providing them with humanitarian assistance.  In our efforts, we have partnered with several advocacy and non-profit organizations including Al Otro Lado and Haitian Bridge Alliance to investigate the ongoing U.S. border crisis, challenge the inhumane practice of family detention, and provide access to legal representation for asylum seekers exposed to harmful enforcement practices.

At the border, we have witnessed the most raw and deep pain of human beings.  In each moment, we have seen and felt the maximum extremes of the human condition.  We have witnessed impossible despair mingled with reverent hope.  Our response to human beings fleeing certain death, a long terrifying journey, and the treatment at the border is simply inexcusable.

These obstacles are compounded for Black migrants who are particularly vulnerable because language and cultural barriers make it difficult to access service providers. This fund aims to create a systemic response to meet the needs of Ethiopians and Eritreans through a novel partnership with Habesha attorneys and immigrant service providers in Tijuana and the U.S.

On our last trip to the border, we saw an incredibly large number of Eritreans and Ethiopians stranded in Tijuana, with no clear idea of when they will be granted their right to seek asylum in the United States. They have, instead, been provided with a number on a “list” of thousands.  This “list” system is being used by the United States and Mexico. The goal of the list is to allow only a small number of asylum seekers into the United States at a time. Only six numbers were called the morning we were at the border with the Habesha asylum seekers. At this rate, Eritreans and Ethiopians will be stuck in Tijuana for months. This would mean more grueling months spent in migrant shelters where capacity has stretched to the breaking point, sometimes forcing asylum seekers to huddle together on bridges, sleep on the street in the cold, and has left them vulnerable to attack and/or death.

Many Eritreans and Ethiopians do not have status in Mexico. With this being said, they are subject to removal at any time. These individuals are fleeing violence, suffering, and persecution in their home country. They have endured many hardships on a long and dangerous journey to the United States, many losing their lives along the way.  Like many of us, they have come here by whatever means possible to have a chance at life.  These asylum seekers are desperate to live and we commit to do everything in our power to assist them.

The mayor of Tijuana has declared a humanitarian crisis. Advocates estimate the number of asylum seekers has recently increased. Many more arrive traumatized and unable to clearly assert asylum claims without legal counsel.

Due to unlivable conditions, inaccessibility and desperation, some are close to losing hope because they have run out of funds to stay afloat in Tijuana, especially due to the fact that they do not have the employment authorization necessary to survive during what is expected to be an extended period of stay in Mexico.  We are committed to responding to the needs of the Habesha asylum seekers.  Your support will be the welcoming hand they so desperately need at this critical point of their journey to find safety, freedom, and a chance at life.

The following is a list of how your contributions will be used:

The funds raised will only be used to provide humanitarian assistance to the Habesha asylum seekers.  For those who aren’t able to be in Tijuana with us physically, but are eager to give back, this is a great way to do so.  Every dollar donated will go towards helping people who are in dire need of human compassion.

All of your contributions will be used to fund what is deemed to be the greatest need among the Habesha asylum seekers.

Thank you in advance for all of your help as we embark on this journey.